Happy New Year y’all. I’m so excited for a fresh start and looking forward to bringing you guys lots of new recipes this year. Starting with this Gluten Free Sweet Skillet Cornbread. Let me share some history with you before we get to the recipe. All of my grandparents were born in different parts of the South and passed down some Southern traditions to their children, and us grandchildren. One of those traditions is cooking black-eyed peas, collard greens and cornbread on New Year’s Eve. The black eyed peas symbolizes good luck, while the collard greens represent money and the cornbread- gold. I always make the black eyed peas (recipe coming soon) and collard greens on NYE. But this year I made the cornbread as well.

Now I grew up eating Jiffy mix. It was damn good and that’s what I used to use when making cornbread for my family. But when I stopped eating pork I left Jiffy alone as it has lard (pork fat). Back then I thought that baking from scratch was hard. So I just stopped eating cornbread. After doing some research I realized that baking from scratch wasn’t as hard as I thought. It took some trial and error, but I came up with the perfect homemade cornbread recipe and realized that it came out best when made in a cast iron skillet. The skillet gives the cornbread a crispy buttery crust that tastes so divine.

Since I’ve been trying to transition my diet to completely gluten free, I upgraded my recipe and swapped out the regular all purpose flour for gluten free measure for measure flour. The recipe is just as delicious as the gluten version. This recipe is technically Vegetarian as well (if you eat eggs) since I swapped out butter for Soy Free Earth Balance and couldn’t taste a difference. I also swapped out the almond milk that I usually use for an almond/coconut milk blend and it added a nice touch. I love it when I’m able to adjust a recipe for my current dietary needs without losing the flavor that I’ve come to love.

There’s no need for dessert when you make this cornbread as it tastes like cake- fluffy, sweet and buttery. If you prefer a grittier cornbread, then you can swap the amounts of cornmeal and flour. Also, if you prefer your cornbread to be less sweet, then you can adjust the sugar to a half cup. Now enough of the chit chat… let’s get to this Gluten Free Sweet Skillet Cornbread Recipe. 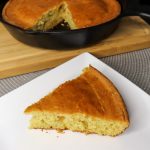 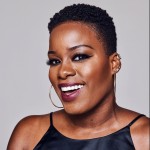